Legendary office product of Microsoft, which is used today by more than 1 billion people around the world, was created in 1985 for … Apple 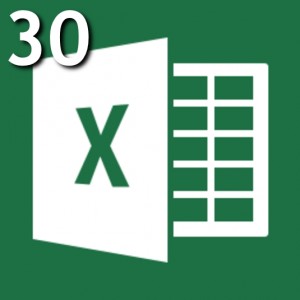 Аn autumn day in late 1984 four people gather in the small apartment of Red Lion Hotel in Bellevue, near Seattle. The purpose of the meeting is to lay the foundations of a secret project codenamed „Odyssey.“ For three days they plan, draw, program, write code and discuss hard to clarify the concept of creation and development of new software, which a couple of years later would change the business world, and will bring them millions of dollars.

In the group are young keen programmer with a hippie image, a graduate of MIT – Doug Klunder, his friend and talented mathematician, a graduate of Yale, but unlike him, rather looks like a playboy – Jabe Blumenthal, a neatly dressed clean-shaven young man with Hungarian accent and experience at Xerox named Charles Simonyi and the fourth guy is seemingly typical nerd with big magnifying glasses, his disheveled nondescript appearance and teenage look nothing indicate that he has already won over 50 million dollars, and his modest, founded few years ago software company based in nearby town Redmond, has recently signed a big contract with the giant IBM.

Probably guessed that the mentioned company is Microsoft, and the name of the last of the group of four, started the project „Odyssey„, is Bill Gates. The product that will appear a few months later as a result of their and about 10 more people efforts, was primarily named „Mr Speadsheet“ (after “Master Plan” name was rejected), but shortly before official launch someone from the marketing department, whose identity unfortunately nobody does not remember suggested another name – „Excel“. Thus was born the Legend … 30 years later it continues to „live“ in about 1, 2 billion computers around the world, 1 in 6 people on the planet use Excel….

In the Beginning … Was Not Excel

Of course, Excel is not the beginning, but rather the “crown” of several years’ efforts of various scientists, programmers and companies dedicated to the idea of creating the tools to facilitate the work with numbers and data analysis for businesses and ordinary people with personal computers. These tools called „electronic table“, “electronic paper”, „visual calculators“, „spreadsheets“, get its final and perfect form with the advent of Excel.

Researchers agree that the man who developed the theoretical foundations, laid principles for the inventing of such product, is a professor of accounting at the University of Berkeley, California – Richard Mattessich. All in details is described in his book „Simulation of the Firm Through a Budget Computer Program“, published in 1964. He himself even programmed prototype spreadsheet using the language Fortran.

It may take longer than the 10 years to develop the technology to such an extent that the concept of spreadsheets to get a new boost. Late 70s are golden „pioneering“ years of computer „geeks.“ There are lots of new programming languages, processors, operating systems, also the first personal computers appeared, for use off which is not required PhD from Harvard. Apple, Microsoft and dozens of small IT companies founded by bearded long-haired hippies and hackers-programmers start looking for its place under the sun, trying to „change the world“ by means of computer.

Bricklin and Frankston in the early 80s

One of these young tech-idealists is Dan Bricklin who studied MBA at Harvard, but his real passion is programming. In 1978 he created the first spreadsheet software which called Visible Calculator. It performs basic calculations within 5 columns and 20 rows. A little later to Bricklin joins Bob Frankston – his friend and ally, also obsessed by the idea of spreadsheets and computer calculations. Frankston makes some improvements in the product and in 1979 they released it officially on the market under the name VisiCalc. Calculation and data processing field then has 254 rows and 63 columns.

For this to happen, however, merit another man whose name deserves to be mentioned – Peter Jennings, at the time known for its chess playing software (MicroChess). Appreciate the potential of the project, he takes it under his company Personal Software wing and invested considerable finances in development of VisiCalc. Their first client was Apple. Some researchers said that one of the big contributors to the Apple II sales boom was precisely VisiCalc. For a short time the product becomes so popular that two years later, Jennings decided to rename his company то VisiCorp.

In 1982, 32-year-old Mitch Kapor, the person responsible for marketing and sales of VisiCorp, left the company, led by the idea that can create something even better than VisiCalc. He founded Lotus Development and a year later launched Lotus 123 – the „killer“ of VisiCalc – better spreadsheet product with new functionalities and improved architecture and UI. Lotus 123 was able to run under MS-DOS and IBM did not hesitate immediately to contract Kapor’ company, integrating the new product into their PC.

In 1980 appeared another, almost forgotten software product for a short time successfully compete with VisiCalc, and later with Lotus 123. His name is SuperCalc, developed by talented programmer Gary Balleisen, part of the company Sorcim. But the contracts of Apple with VisiCorp and IBM with Lotus, and especially the emergence and development of Excel, do not give a chance SuperCalc to survive. Despite its qualities, at the end of the 80s this spreadsheet software sink into oblivion as the same happens with VisiCalc and Lotus 123 in the early 90s.

Another spreadsheets product, which deserve our attention, appeared in 1984 and the following year received exceptional reviews from PC week and PC Magazine – called Most Significant Product of the Year. Javelin is defined as „business planning tool that provides many of the functions that traditional worksheets provide, but adds a new dimension by“ knowing „more about your data than other programs. Javelin provides a variety of views of your data, including traditional table, worksheet, and graph views, but also formula, diagram, notes, and error views. Javelin links variables by formulas, instead of simple references to cells of data, and deals with time series data and the calendar very effectively. „
The product was developed by a team of Javelin Software Company, among them Rob Firmin, Stan Kugel, John Levine, Christopher Herot and Charles Frankston (brother of Bob Frankston – one of the VisiCalc creators ). Run under MS-DOS.
Despite its undoubted qualities and functionalities, in some ways superior to its competitors on the spreadsheets market, Javelin failed and in 1988 ceased to exist as a product. Later on Lotus used Javelin as a basis for development to his new spreadsheets software Improv for NeXT, released in 1991.

Let’s back to Microsoft. Of course, the company of Bill Gates did not create its excellent spreadsheets from scratch. The foundation on which step the developers of Excel, is Microsoft product called Multiplan. It hit the market in 1982 to compete VisiCalc. In contrast of it, instead of A1 addressing, Multiplan uses R1C1 addressing (later Excel will integrate both methods of reference, today „default“ is A1). Spreadsheets competition became even stronger with the arrival of Lotus 123 and their warm relations with IBM.

So Microsoft has to choose one of outlined two options – either to improve considerably Multiplan or to create a new „killer“ product. In January, 1984, something happened which clearly define the choice of Bill Gates to the second option. Apple launched the “Macintosh” computer – with revolutionary new GUI (graphical user interface), which will send very soon MS-DOS and all other existing OS in history. At the mentioned above meeting in the Red Lion Hotel all decided to abandon MS-DOS and to focus on developing software that works with the new GUI and OS of Apple. 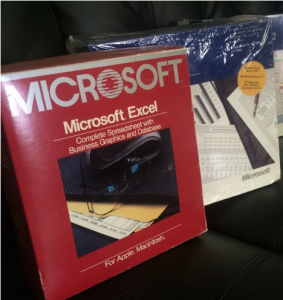 At this time Microsoft had already created Multiplan version for new Macintosh. The results were encouraging and the next important step is … Excel. To the Project team joined some other people whose contributions to Excel should not be forgotten – Jon DeVaan (later chief of Office department at Microsoft), Mike Kos (today leading software engineer at Google), Jeffrey Harbers (who later would become a chief software architect of Microsoft Office) and Jeff Raikes (responsible for business management of the product, he had experience with Multiplan project management) Their aim is to create „a product that does everything that VisCalc and Lotus 123 do but better and faster.“

But not only. They worked hard to invent a real competitive advantage over spreadsheets software competitors. And this was “intelligent recalc” feature. Rather than recalculating all the cells when one cell was changed, it selectively recalculated cells affected by the change — making the program more efficient and improving its performance on the limited hardware of early personal computers. The team was so obsessed by this “recalc” feature, so they made t-shirts with the inscription “Excel – Recalc or Die!”

Microsoft announced the official release for September 30, 1985. Although initially everything goes according to plan, in the last minute some bugs were found. Final full audit of the software code started again, which lasted until the late hours of September 29. Sometime after midnight, the master disc was ready and sent out for duplication. September 30th in the morning several copies of the first version of Excel for Macintosh (Excel 1.0) were shipped to the nearest software store. So begins the real story of this legendary product…

Today there are 13 versions of Excel for Windows and 13 versions for Mac. According to some researchers in 1986 it was created stable version of Excel for MS-DOS, but it is never launched officially.

The Creators of Spreadsheets – Where Are They Now? 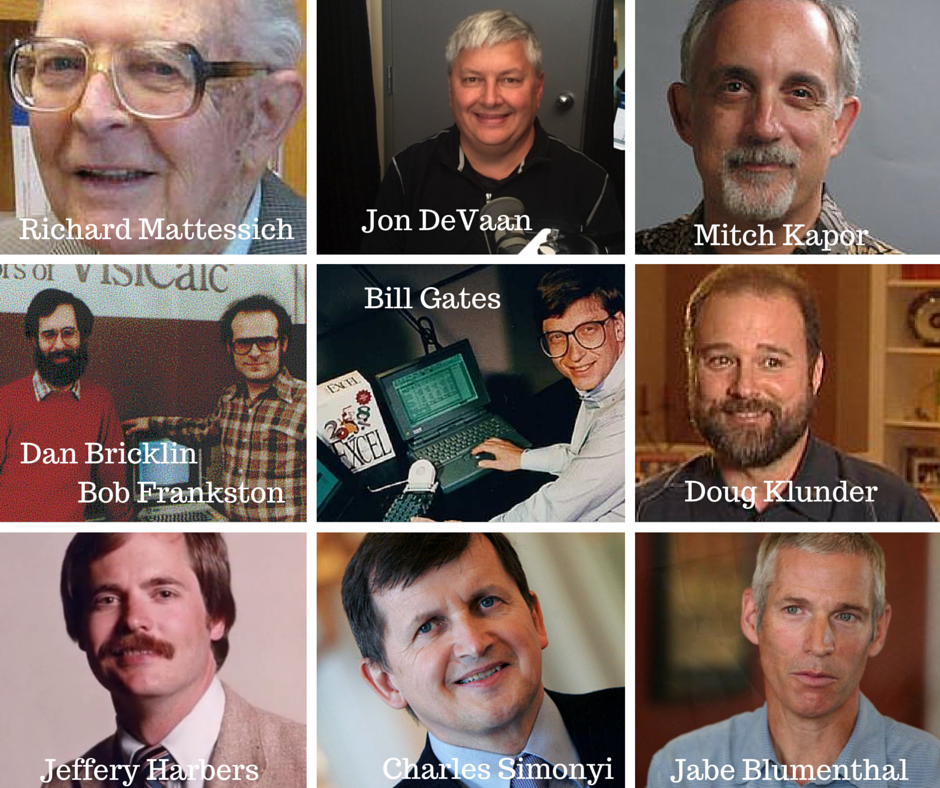 Many of the facts and “heroes” from the story written above, you can see and hear in this interesting video, which use footage from a Microsoft documentary dedicated to the 25th anniversary of Excel:

Everything new about Microsoft Excel you will learn from the Microsoft Office site of Excel, Excel Blog or the Facebook Fan Page of Excel.

In our page Microsoft Resources you will find the links to some of the most authoritative websites devoted to Excel – the greatest software ever created by Microsoft.

And finally, do not forget – Happy 30-th Birthday, Excel!